A downloadable game for Windows

Super Punchy Face is a roguelite beat 'em up where every single thing is a weapon. Choose from dozens of techniques to create your unique fighting style, save your uncle's dojo from getting demolished, and smash your way to the Landlord’s mansion to give him a piece of your mind.

Put your creativity to the test in the frenetic, sandbox combat where you are the underdog. Do whatever it takes to win against equally capable opponents, in levels that are different every time. Between each fight, choose from a random selection of techniques to perfect your style. You’ll be breaking everything you touch, either by hitting someone with it or by hitting it with someone.

Similar to the style of classic beat ‘em ups like Streets of Rage or River City Ransom, but with the unpredictable and highly replayable design of modern roguelites like Spelunky and Nuclear Throne. Combine all that with the slapstick improvisation of a Jackie Chan movie, and you got a beat 'em up with endless possibilities.

Everything is a weapon - From beanbag chairs to ping-pong paddles, mop buckets to candy boxes, everything can be swung, thrown, kicked, and used in creative ways to defeat your opponents. No magic, no guns, no swords, no killing. You’ll have to take advantage of the everyday objects around you just to stand a chance against the relentless opponents.

Custom fighting styles – Choose from dozens of techniques to create your individual fighting style. No boring stat boosts, these upgrades change the way your moves work or introduce entirely new ones for you to master. Unlock new techniques through challenges and use them from the very start of new runs. Make careful decisions about which abilities to take between levels - do you want to be able to tear through enemies, or do you need more ways to defend yourself?

Sandbox gameplay - Players are encouraged to experiment with the overlapping systems, and are rewarded with a vast possibility space full of slapstick situations. The simple controls make it easy to navigate the chaos, as everything and everyone interacts with each other in exciting but predictable ways.

Heartwarming story - Control titular hero Punchy as they and their uncle stand up to the evil landlord and embark on a wholesome quest to save their community center from being demolished.

Want to see this reach its full potential? Consider donating and help us fight the good fight!

In order to download this game you must purchase it at or above the minimum price of $10 USD. You will get access to the following files:

Groovy tunes and charming art, but the gameplay could use a bit of polish. I feel the hitfreeze is bit too heavy and late, makes the punches feel too sluggish. The screenshake is also a bit heavy for my tastes, maybe a slider in the options menu?

Visually, the UI is very barebones for the most part compared to the artwork, it could use a few of those charming sprites in there.

Gameplay wise, just spamming punch in the earlier levels was my go to to win, but I liked the increase of difficulty later on, though I feel the AI should be allowed to throw things faster to force the player on the defensive.

Weirdly enough though, the later levels made my machine chug, which is weird for the seemingly low spec requirements.

All in all, charming, but it could use polish to match the quality of music and spritework.

Hey thank you so much for the feedback!!

Polish is definitely something we need to work on, across the board honestly. A slider for the sfx intensity is a great idea, anything I can do to let players tailor the game to their tastes! We're already in the process of redesigning the ui cuz uhh yeah those bars are pretty boring...

if you don't mind, what are your machine's specs? That's the first I've heard of chugging for quite a while. I've been trying to put off optimizing 😅

Hey there, my specs are:

Windows 10, gtx 2060 super, 16gb ddr4 ram, amd ryzen 5 3600. There is a possibility of my machine taking away resources since I was playing windowed, but it should still be able to play the game smoothly.

Just wanted to say that I played and finished this little demo today and I had a blast with it! I really enjoy the art style and character designs, and it has a strong and fun foundation for gameplay! Love the chaotic factor and using the environment to your disposal, that is always fun.

I'll be keeping an eye on this one, I hope progress goes well and that it gets more attention!

Also gotta say my favorite technique has to be the increased punch speed. Nothing more fun then putting a guy in the corner and just wailing on him with punches going at light speed lol

Hey thanks for the love!! I'm glad you liked it! We got something really special coming up so I'm hopin we get more attention too :) I'd love to hear more about what you think - you should pop in our discord and say hi!

Hey thanks for reaching out. Unfortunately this is a common problem. Because we're indie and not registered with microsoft, most anti virus sees our executable as a threat :(

So how exactly do i get the game?

Apparently if you download it and then wait to run it, the av software will be able to complete a scan and and confirm its not a virus. I could also try to Dropbox you a link but idk if your av would treat that any different. If all else fails you can disable your av to download it but I totally understand if you don't want to do that. I'll do some research today and see if I can find a better solution.

Hey. I just played your game. I love it. I love animations and arts. However, I had some issues. When I pressed shift too many times, the game crashed. Also, It told me to use controller buttons in tutorials sometimes. I did not connect any controllers at that moment. I recorded how I played your game on the video. You can check it below. If you want me to delete the video, let me know. However, if you like the video, I make videos for such developers like you every day. I will be happy if you subscribe. I would love to make another video with your games in the future if you are fine with the idea. I subscribed to your itch.io page so that I will be notified. 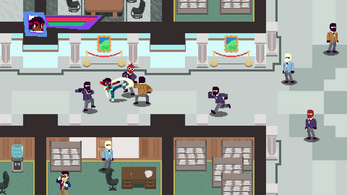 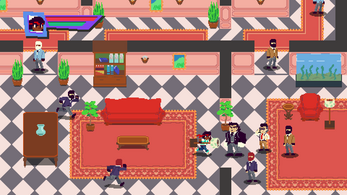